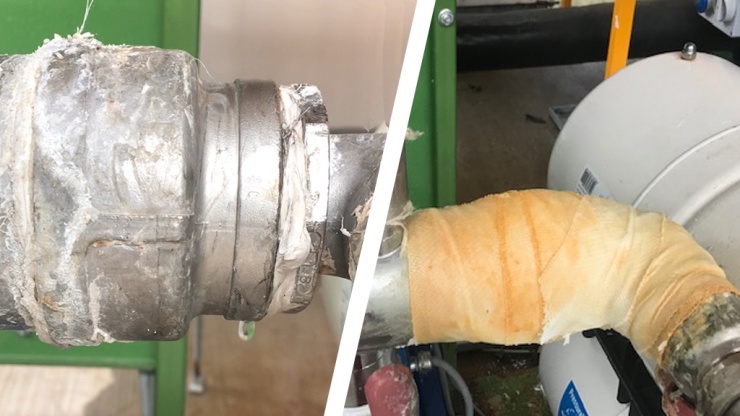 An automotive safety supplier in the United Kingdom required a quick and easy solution for a combined heat and power CHP system repair after pipework within their on-site power plant developed a leak.

The CHP system was located within the company’s on-site power plant. Although not a major leak, enough water was dripping from an elbow joint to be causing an issue as it was seeping onto other parts of the CHP system, including motors and gas tanks which were located underneath the pipe.

CHP systems are put in place to increase energy efficiency and drive down costs. They do this by making use of the heat which would otherwise be wasted when generating electrical or mechanical power. CHP systems typically reduces energy bills by 20% and carbon emissions by 30%.

If a CHP system is not running efficiently, then these savings are lost. The automotive safety supplier was therefore keen to carry out a CHP system repair as quickly and easily as possible, without having to put the system out of service.

There were two complications surrounding the repair. Firstly, the leak’s location on a difficult elbow meant that a versatile repair solution was needed to seal around the joint. Secondly, CHP systems can operate at temperatures of up to 120°C, meaning that the products used had to be effective in high-temperature applications.

Because the pipe in question was wet and pressure could not be turned off to drain it, it was decided to use a SylWrap Universal Pipe Repair Kit. Wrap & Seal Pipe Burst Tape was applied around the damaged area to seal the leak. This was then overwrapped with SylWrap Pipe Repair Bandage which set rock hard to provide an impact resistant, permanent repair.

The solution worked almost instantly, restoring the CHP system to full working order. The challenges that were noted before the repair began – the leak occurring around a joint and the extreme temperatures – were easily overcome.

The extra stretch and thickness of the Pipe Repair Tape ensured it could easily wrap and bond around the elbow. Both products are resistant up to 200°C, although the Pipe Repair Bandage did cure with a red tinge because of the temperature extremes.

If the automotive safety supplier wished to make the Bandage appear more uniform with the rest of the metallic pipe, then it could be easily painted over at a later date.

The automotive safety supplier were extremely pleased with the repair, noting how quickly and effectively it worked in what had at first appeared challenging circumstances. The CHP system remains in full working order.

One thought on “Combined Heat and Power System Repair”