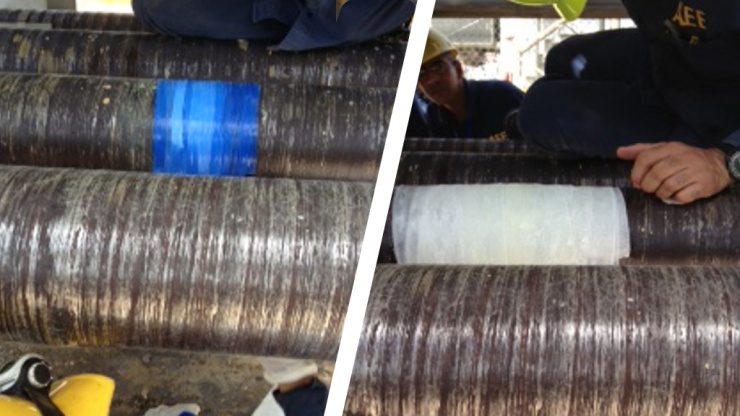 The Power Authority in Puerto Rico required a contaminated water pipe repair to be carried out without the system which the pipe was a part of having to be put out of service.

The damaged pipe ran contaminated water back to the treatment plant. At some point, a small crack had appeared in the pipe, possibly from it being impacted when equipment that had been stored underneath the pipe had been moved to a new location.

As a result of the crack, the pipe was now leaking contaminated water. To carry out either a pipe replacement or to drain the pipe for a repair would have required the shutdown of the generator that the pipe supplied. This in turn would have significantly reduced the Plant’s power output, not to mention being a time consuming and costly exercise.

The Power Authority were therefore looking for a repair solution that could carry out a live leak repair on the contaminated water pipe.

To avoid taking the generator out of service, Wrap & Seal Pipe Burst Tape was wrapped around the crack to seal the live leak. SylWrap Pipe Repair Bandages were then applied over the top of the Pipe Burst Tape for a permanent solution.

Both Wrap & Seal Pipe Burst Tape and SylWrap Pipe Repair Bandages can be purchased in one SylWrap Universal Pipe Repair Kit. For users who may need to carry out regular repairs of this type, then the SylWrap Pipe Repair Contractor Case contains enough products to fix multiple leaks and can be stored easily on a van should emergencies arise.

The contaminated water pipe repair was carried out inside of 30 minutes. It cost the Power Authority a fraction of what the purchase and installation of an expensive new part would have, but most importantly of all it ensured that the Plant did not need to take a generator out of service, allowing it to continue running at full capacity.

The initial repair of the contaminated water pipe took place in 2015. Less than two years later, Puerto Rico was hit by Hurricane Maria, a deadly Category 5 hurricane that devastated the island and its neighbours Dominica and the U.S. Virgin Islands. Hurricane Maria is regarded as the worst natural disaster in recorded history to have affected Puerto Rico.

Six months after the hurricane, the contractor who carried out the repair at the Plant contacted Sylmasta. The pipe was still working but more importantly, the Power Authority were extremely grateful that they had found a way to fix the problem so easily.

Without SylWrap products, the repair may never have happened and the pipe and system would have remained out of service.

This would have left the Plant with one less operational generator during and after Hurricane Maria at a time when power was critical to the island’s recovery.